As luck would have it, like so many other public gatherings, the re-opening of the Wake County Range has been postponed until further notice because of the Covid-19 virus.  Any further information is not available right now but it’s anticipated that we should know more soon. There are of course more important things to think about than getting back on the range so like most of you, we will be hunkered down at the hacienda in self quarantine.  If we see or hear anything that represents progress in getting the range opened back up rest assured we’ll post it up straightaway right here.  Another good place for updates is the Wildlife Resources Range-finder. 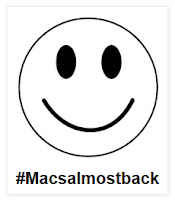 Be safe, have fun.

Hardly a big deal but kind of fun just the same. In response to a tweet announcing the re-opening of the Wake County Range, Cam Edwards, Editor of Bearing Arms and host of their show "Cam & Co." sends along his congratulations. It looked like this: 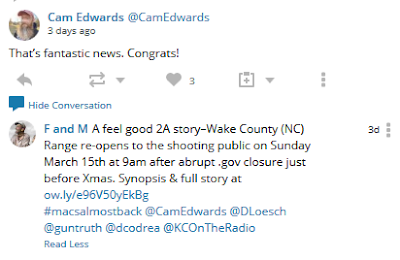 on Sunday, March 08, 2020 No comments:
Email ThisBlogThis!Share to TwitterShare to FacebookShare to Pinterest

Against conventional wisdom, the range will in fact re-open to the public on March 15th.  The shooting public of Wake County will again have a proper public place (three 50's and a 100 INDOOR) to go to shoot and hang out with shooting friends.

Let’s look back for a moment and remember that it was on December 15th , only 10 short weeks ago, that the publicly owned management and staff were learning that their contract was being cancelled  by the Wake County Sheriff and they were out after almost 20 years of service to the shooters of Wake County.  The County Commissioners found out about the abrupt contract cancellation shortly thereafter.  Since that day:

Now you have to admit that rebuilding all that in such a short time with so many people and agencies is actually pretty phenomenal and entirely contrary to most folks perception of government entities as just slightly glacial.  A lot of people did a lot of expeditious work to make all this happen.  They deserve a fanny-pat in all this too.  To that end, make plans if you can to get your range card on Sunday March 15th between 9am and 7 pm.  A full parking lot (on video!) and a HUGE number of new range cards issued is an easily understood “thank-you” to all the local and state government folks who hustled a little faster than is customary to get this done for the shooting public.  It’s also a sign to those who are not so thrilled about the current state of public hours at the range that the public interest is not to be ignored.

Send a message, make a difference. A lot of folks talk about doing that. You have a chance to actually do it!